GovBR x Internet! Message to the world: Save the internet in Brazil! #StopMarcoCivil

Text in English GovBR x Internet! Message to the world: Save the internet in Brazil! #StopMarcoCivil 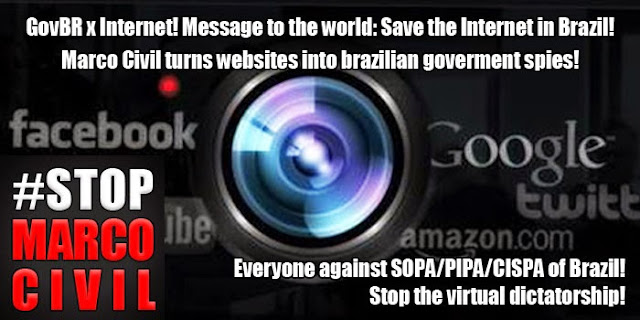 Intro: A resident of Sarandi inside of Paraná, was arrested for criticizing the social networks, a blitz of military police. The photo shows the manager companies Clodoaldo Lima, being stuck in the middle of the workday. They asked if I was, I said it was, I do not know why, I was handcuffed ... 'They claimed what? Nothing. I found out later that it was because of the post. The reason for the arrest was this comment on a page that were reporting a blitz of traffic Sarandi in Paraná.

Clodoaldo said the operation was an abuse of authority, with the sole purpose of harming workers instead of going after bad guys. He also said he lacked good judgment of the commander of the operation, the Lamb soldier. The Lamb soldier is this that appears Clodoaldo leading to the station, he accuses the manager of slander companies. The communications officer of the battalion defended the police action. It's a situation that has occurred, there is a proven fact of defamation, slander regarding the police and the police acted within the law.

As for the president of the Human Rights Commission of OAB, there was abuse in the police action. If it offended his honor, his decency, he should look for the judiciary, not catch the entire corporation and go to prison the good citizen. I went to give my opinion as a citizen, the problem looks that I packed.

Vídeo:
Greetings citizens of the world, dear internet users, we are Anonymous. This can be one of the most important videos of internet history in Brazil, because it shows that brazilian politicians passed a law that makes all websites in to an government spy. And now we ask your help to stop this law. This law was approved under suspicious circumstances, faster than ever seen in Chamber of Deputies and Federal Senate, also President Dilma considered retaliate who vote against this law.

"Brazilian Civil Rights Framework for the Internet" or "Marco Civil da Internet" doesn't allow safe and private browsing, it forces Internet Service Providers to store all navigation data for six months or more, also gives the right to any agent of the state require these data with a simple court order. Nothing can ensure the security of these stored data, which can be completely vulnerable. Storing the data itself makes internet users in Brazil guilty without committing any crime. President of Brazil can change this law at any time by decree, also the brazilian government requires that internet companies follow the laws of Brazil and we all know that is not good.

Recently, the attorney Gisele Arantes filed a lawsuit, asking to remove the app "Secret", because of "Marco Civil da Internet", the app allowed people talk without being identified. The app was blocked but after a request in court from Google, "Secret" returned to be freely distributed in online stores. This lawyer had the audacity to say that the judge's decision was a setback, and he doesn't understand the internet. If the app "Secret" should be blocked by misuse of a minority, then we would have to do the same with email, social medias or the internet itself which has the access without identification as a characteristic.

The account @AnonymousBr4sil fought against "Marco Civil da Internet" abuses, trying to warn the people that this project was actually a Trojan horse against the internet in Brazil. But the government used artists and social movements to make a defamation campaign against #StopMarcoCivil. This was expected. When the government is threatened with the loss of power or control, they will use any means required to ensure that the view of the public supports them instead the evidences which has come to light.

These are common methods seen used against every person who has ever revealed the truth against the State. It is simply immoral and unethical monitor each person in Brazil, assuming that everyone must be guilty of something. Companies like Facebook, Google and Twitter supported the "Marco Civil da Internet", it means that a large part of the internet as we know it is under inspection. The right to privacy was violated. People are in a greater danger from this surveillance system. Tim Berners-Lee, the inventor of the World Wide Web, supported the "Marco Civil da Internet", the government even used his statements to try convince the people, saying it was something good. But we believe he was unaware of all the articles included in the law.

Now, knowing that this project was a trojan horse like, specifically articles of survaillance and data storage, we would like to know his opinion about and we ask for his help to fight against this surveillance system.

We know that the guard of data or logs does not guarantee solving crimes. In the European Union, only one in ten thousand cases the guard of logs effectively help to solve a crime. The reason is quite simple: who wants to commit a crime on the internet, knows how to do it without a trace or at least without leaving any obvious trail. Electoral campaigns are saying that Dilma had the courage to face the president of US in the UN and she responded to the spying that NSA did in Brazil with the "Marco Civil da Internet". The truth is that this law can monitor each internet user in Brazil, in the same way that Snowden could monitor any American citizen through the NSA. Today the Brazilian government can do the same.

Brazil's government doesn't even protect their own sites, not even IRS data and INFOSEG, but they told that with "Marco Civil da Internet" people will be protected from the NSA, what we all know isn't true! Please help us spread this truth, so that everyone knows what is happening in Brazil. Anonymous around the world has always been against governments who wanted to censor the Internet. Won't be different in Brazil, we will always be on the side of the people and against tyranny of governments, whatever they are!

With "Marco Civil da Internet" approved, dozens of activists were arresteds one day before the finals of Fifa World Cup. Some of them were Anonymous, others belonged to social movements. "Marco Civil da Internet" led the people away from the internet, many are afraid to like, comment or share any information because of government repression. At the beginning of the video we watch a citizen, who was handcuffed in their workplace and brought to the police station, because he commented on a Facebook fan page about a police blitz in Brazil. That is unacceptable, but in Brazil it is becoming common.

Also the electoral system in Brazil, is being accused of many frauds by several experts. The electronic voting machines used in Brazil has been denounced by Anonymous for a long time. Diebold, voting machine manufacturer, was convicted for corruption in some countries. A very large fraud can be happening because we don't know where the votes are going to. Henrique Pizzolato, a Brazilian politician, convicted for corruption, peculation and money laundering, in "Mensalão Scandal", used his dead brother identification for vote, this only shows how the electoral process in Brazil is flawed.

Check the Brazilian eletronic voting, look for the experts that pointed flaws in the system. Diego Aranha, Amílcar Brunazo and many others! We can't report, make revolution or express opinions on the internet with these monitoring laws, because the possibility of reataliation is too large. In 2013 a law named Carolina Dieckmann typified "computer crimes". Carolina Dieckmann is an actress who has nudity pictures posted on the web in 2011. The law was sanctioned by the President Dilma in 2012, even with many bad critics, because the articles of this law are confusing and can cause double or subjective interpretation, which can be used for classifying trivial conducts into criminal or to defend an support cyber offenders, which could make this law unjust and ineffective.

And if the crime is committed against the president, governors, mayors and others, the punishment shall be increased by one third to one half. It means that already had a harsh law in Brazil, which raises the goverment authorities over the people! Share, download, upload this video in several accounts, send to your friends and to sites, time is running and right now many Internet activists from Brazil can be in danger, for putting themselves against this audacious and coward project of the Brazilian government. Take this issue to your country embassy, warn that Brazil is monitoring everyone, call all of your friends and develop operations against this law!

Even with one of the worst internet in the world and paying dearly for it, we achieve great things for the people through the internet and and we intend to go on. It's time to Anonymous reunite, against government control of the internet in Brazil. Supporters of Aaron Swartz, Julian Assange, Chelsea Manning, Anakata, Jeremy Hammond, Barrett Brown, Edward Snowden and many others fighters for freedom, join us in this fight!


Help us, creating websites, where brazilians can report to the authorities, serious violations against human rights, because it isn't solving anything to report in Brazil, since almost all authorities are corrupted. Help us, producing material in several languages, most of our work is in portuguese and we need to spread to the world what happens in Brazil. A Facebook event in @AnonymousBr4sil will inform the people. GovBr x Internet: Message to the world, save the internet in Brazil. #StopMarcoCivil We invite you to be against the abuses of "Marco Civil da Internet"! @AnonymousBr4sil is an account, among many others, who supports Anonymous, and since 2012 try to spread Anonymous in Brazil and also lead the truths to public knowledge.

Assista ao vídeo GovBR x Internet!  Message to the world: Save the internet in Brazil! #StopMarcoCivil


Text in English GovBR x Internet! Message to the world: Save the internet in Brazil! #StopMarcoCivil:...
Posted by AnonymousBrasil on Sexta, 24 de outubro de 2014 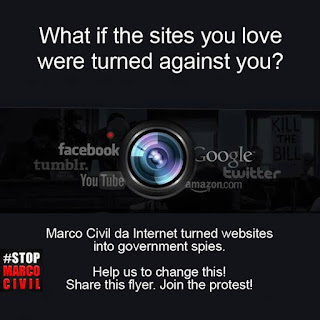 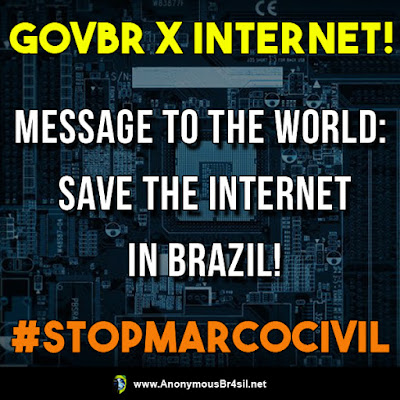 
Man arrested in Brazil after commenting in a Facebook fanpage about a police blitz:...
Posted by AnonymousBrasil on Domingo, 24 de agosto de 2014


Greetings citizens of the world, dear internet users, we are Anonymous. This can be one of the most important videos of... 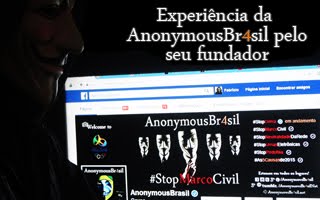 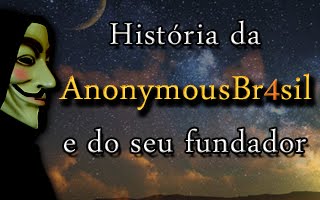 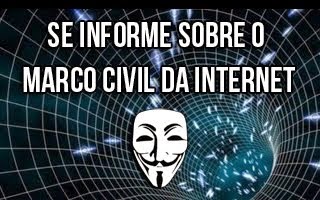